Walt Disney World’s 50th Anniversary is an ongoing celebration! There are all sorts of themed snacks to try throughout the 18 month long celebration. Over 150 new foods and drinks have been created by chefs and mixologists for this monumental celebration. The Walt Disney World Resort has several locations where you can find The 50th themed snacks and we’re here to let you know where you can find them. 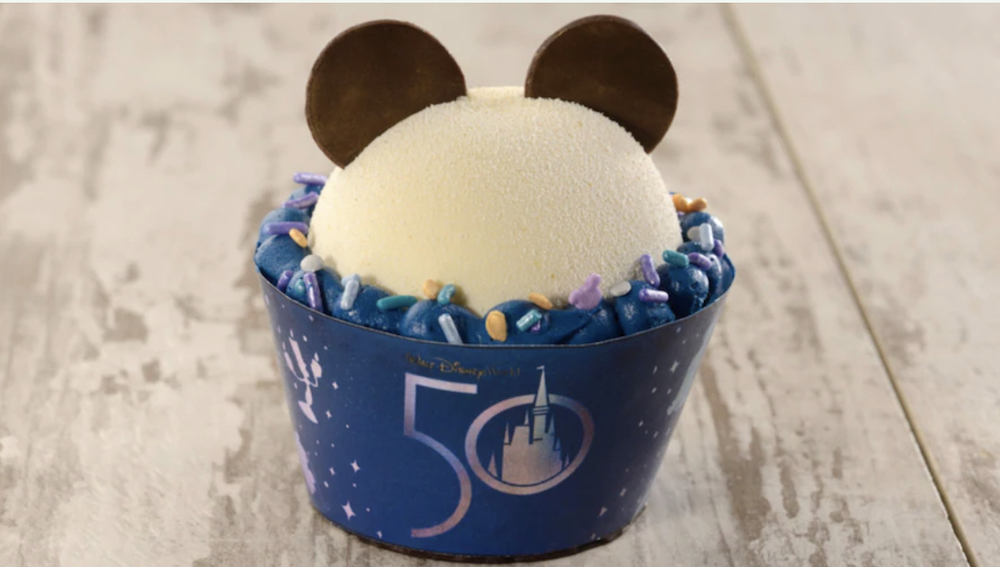 You can find fun 50th Anniversary themed foods and beverages in just about every land in Magic Kingdom. Main Street U.SA, Adventureland, Fantasyland, Frontierland, Liberty Square, and Tomorrowland are all different locations where you can find celebratory foods. There is something for everyone, try the Cheers to 50 Years! Sundae and Monte Cristo Sandwich found at The Plaza Restaurant on Main Street U.S.A or The Anniversary Cinnamon Roll from Main Street Bakery. Here is a complete list of where to can find these magical celebration sips and eats.

If you are craving something sweet then treat your senses to new themed desserts in Epcot. Look for the 50th Mini Chocolate Bundt Cake at Sunshine Seasons or The Chocolate Carmel Bar from Le Celliar Steakhouse.

If you are ready to get wild and try some new magical foods, Disney’s Animal Kingdom offers many different locations with new and improved 50th Anniversary themed snacks.

Disney’s Hollywood Studios is offering lots of new tasty foods along with the glitz and glamour of Hollywood! Such as The 50th Celebration Baked Alaska from The Hollywood Brown Derby.

If you aren’t heading to any of Disney World’s Parks but still want some of the 50th Celebration goodies, you are in luck. There are many places on Disney Springs celebrating the anniversary with themed drinks and food as well.

Disney Resort Hotels also offer special eats and treats in lieu of the celebration. Here is a break down of all Disney Resorts and where you can find celebratory eats!

With over 150 new foods and beverages to try there are many locations throughout Walt Disney World where you can find these items. If you have tried any of the new 50th Anniversary foods? Let us know your favorite in the comments below!

Brittney has been going to Disneyland since she was 3 years old. She has had a deep love for all things Disney ever since. Now as a wife and mother of two, she gets to share the love with her family and re-live the Disney magic through her children’s eyes. Brittney is a Legacy Passholder and you can find her walking down Main Street, U.S.A. with a churro or iced coffee in hand.
Leave A Comment

Avengers Campus To Open In July At Disneyland Paris

Disneyland Paris will gain a thrilling addition to their parks this July. Guests of Walt Disney Studios Park can prepare for… Read More »

The time has come for Disneyland Magic Key Pass to go back on sale starting today! At 9 am PT on November 16, guests can… Read More »