This 18-minute film in the World Showcase at EPCOT takes guests on a whimsical tour through the beautiful countryside, architecture, culture, and history of France.

Have you ever wondered what it would be like to travel across France? Impressions de France at EPCOT is a film that captures the essence of the country through scenic footage and a memorable soundtrack. The theater has plenty of seats and a 200-degree widescreen view to fully immerse you in the sights and sounds of France. Once the film starts, you’ll soon feel like you’re soaring through France via dramatic aerial shots of Château de Chambord, the French Alps in the spring and winter, hot air balloons in front of the cliff city of Rocamadour, and the Étretat Cliffs.

In addition to an abundance of aerial shots, you’ll also find yourself immersed in the culture of France alongside hunting dogs in the Cheverny Forest, a wedding reception at a Brittany farm, onboard a fishing boat, and alongside bicyclists in the Dordogne Valley. You’ll also see iconic French landmarks including the Eiffel Tower, Arch de Triumph, Champs-Élysées, Notre-Dame de Paris, and Versailles. This is a just sampling of all that you will see in the film – it is jam-packed with footage from all corners of France to fully capture the essence of this unique country.

The soundtrack, which includes composers such as Claude Debussy, Maurice Ravel and Paul Dukas, only adds to the grandeur of the film and its ability to transport you out of EPCOT and to another time and place.

This film is currently showing in the evenings starting at 6pm (during the day you can catch the Beauty and the Beast Sing-Along in the same theater). 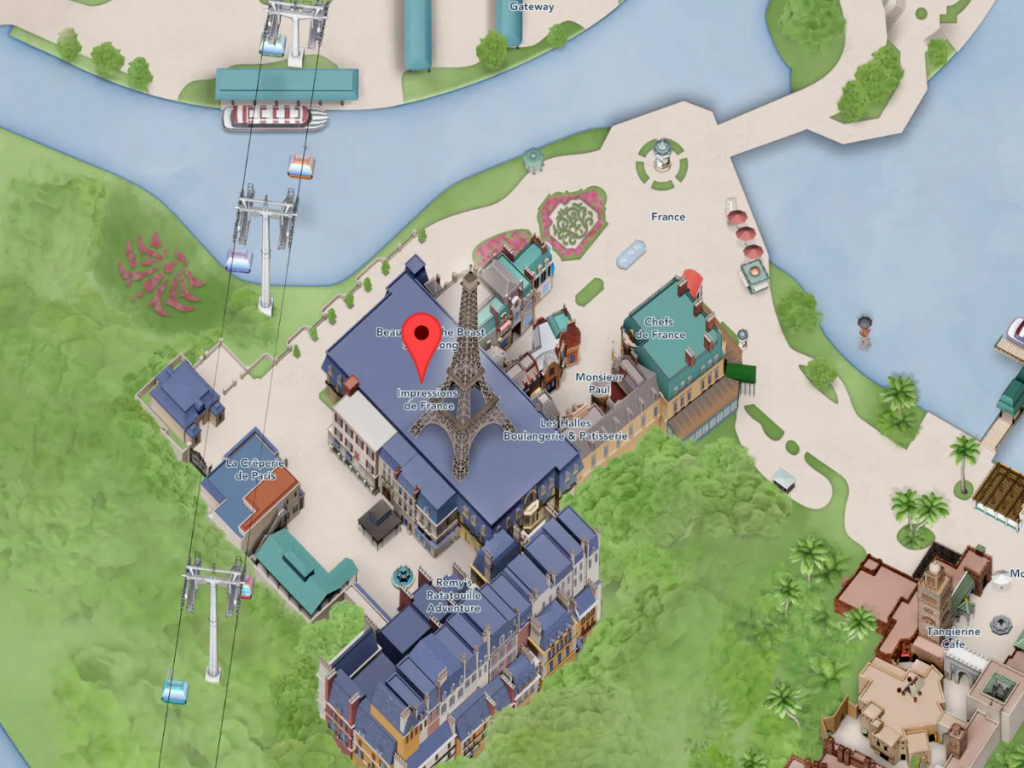 You can also take a Friendship boat near the entrance to World Showcase on the Canada side which will drop you off in Morocco which is adjacent to the France Pavilion. This is a particularly good idea if your feet need a rest or if it’s very hot outside!

If you are entering EPCOT via the international gateway at the back of the park (if you’re arriving via the Skyliner or able to walk to the park from the Boardwalk, Yacht and Beach Club, or Swan and Dolphin resorts), the France Pavilion is just to the right as you enter the park.

Impressions de France is easy to locate once you’ve made it to the France Pavilion as it is just behind the large fountain and planter at the entrance to the area. Wait times remain low for this theater attraction.

As this is a theater attraction, there is no traditional queue, but a large waiting area between showings. While you wait, enjoy the air conditioning as you explore Tales As Old As Time: French Storytelling on Stage and Screen, a small exhibit of six display cases that showcase the adaptation of French literature to film, opera, theater, and ballet. Displays feature classics such as Beauty and the Beast, Les Miserable, The Phantom of the Opera, Sleeping Beauty and more. These displays are supported by various organizations including the Walt Disney Archives which is known for their stellar exhibitions.

Liz has been an avid Disney parks fan her whole life, from traveling to Disney World throughout childhood, to trips with her husband, to creating a Disney-focused YouTube channel. Her husband also caught the Disney bug and they both are looking forward to passing on their love of Disney to their new baby!
Leave A Comment

If you haven’t already heard; Disney’s Animal Kingdom announced their Earth Day celebration for this upcoming Spring. You… Read More »