Enjoy a Broadway quality production at Disney’s Hollywood Studios when you see Beauty & the Beast Live on Stage! It’s a tale as old as time.

Head to the Theater of the Stars to see an award-winning Disney animated film come to life. Belle and all of your favorite characters from Beauty and the Beast ask you be their guest to this 30 minute broadway-style telling of their story. Through elaborate costumes, dance numbers, and set design, you will be immersed in tale of Belle and the Beast.

Beauty & the Beast Live on Stage has been preformed at Disney’s Hollywood Studios since the film’s release, over 20 years ago. Although certain aspects of the show have changed over the years, the basic story has stayed the same. The show opens with the spell that transforms the Beast and all of those who live in his castle. Next, Belle is introduced as she walks through her quaint French village. As the story unfolds, more classic characters appear like Gaston, Lumiere, Mrs. Potts, and Cogsworth.

There are 7 songs from the movie included in Beauty and the Beast Live on Stage. This means you can hear many of the songs you know and love like “Belle”, “Gaston”, “Be Our Guest”, “Something There”, and “Beauty and the Beast”. These songs are in a similar order to the movie version. 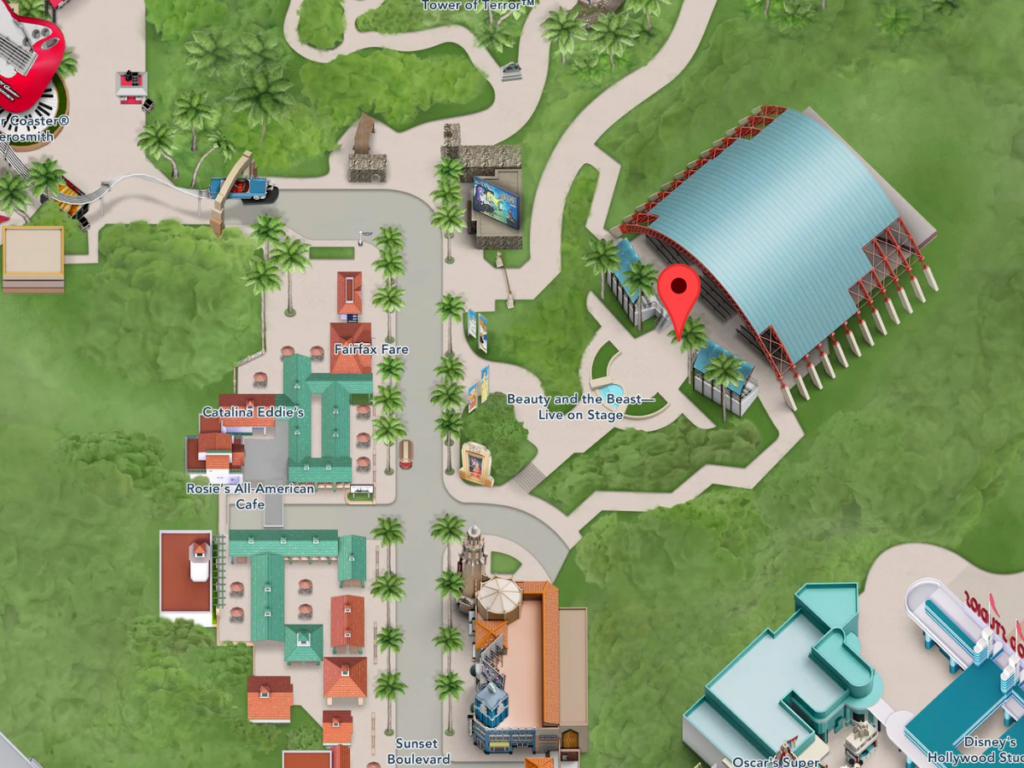 Beauty & the Beast Live on Stage is performed in The Theater of the Stars which is located on Sunset Boulevard at Disney’s Hollywood Studios. The Twilight Zone Tower of Terror and Rock ‘n’ Roller Coaster are also in this area. While this theater is outdoors, it is covered to keep you shaded from the sun as you enjoy the show. There is not a typical line or traditional wait time for this attraction. For the most part, the show is performed each hour on the hour and is 30 minutes long. This means that the earliest you should arrive for a show is 30 minutes prior. If you get to the theater early, you will have more seat options to choose from.

This show shares an entrance with Fantasmic. Cast members will point you towards the correct path at the entrance. You will them walk up a slight ramp to the theater. Once at the amphitheater, you will be directed to a section of bleachers where you will then get to choose where you would like to sit.

Anyone who enjoys Walt Disney World knows that part of the fun is not just the rides and characters, but also the shows!… Read More »

Hop on the legendary Disneyland Railroad for a scenic tour of the Happiest Place On Earth!