At Disney’s Hollywood Studios, guests can cross over into the dimension of sound, sight, and mind known as The Twilight Zone. Guests can board the desolate service elevator of a 1930’s era hotel, The Hollywood Tower Hotel. They are immersed in the macabre storytelling style of this award-winning television series. This attraction takes guests on a jaw dropping tour through not only a vacated hotel but also the bizarre and puzzling “5th dimension”. Due to its dark nature and sudden drops, this attraction may not be suited for all guests. 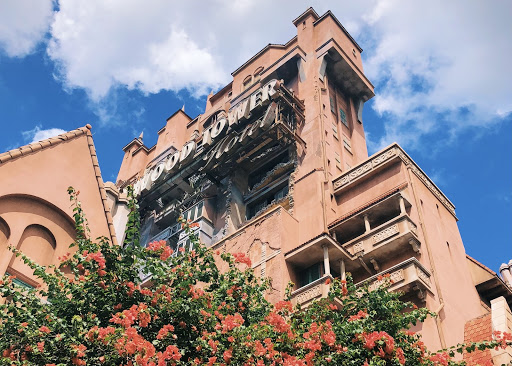 The Hollywood Tower of Terror first opened its doors (and service elevator) for Walt Disney World guests on July 22nd, 1994. Despite being inspired by the 1960’s anthology television series, this attraction tells an original story unrelated to the popular show. Five hotel guests “stepped through the door of the elevator and into a nightmare” and were never to be seen again. The hotel’s aesthetic is inspired by the architecture of the Spanish Colonial Revival and quintessential California locations such as the Mission Inn Hotel and Spa, the Biltmore Hotel, and Elysian Park.

The Tower of Terror’s creation called for the invention of a groundbreaking, new ride system to make it possible for the ride vehicle to move horizontally in and out of the elevator shaft. Inspired by The Twilight Zone’s message of imagination, Disney worked to improve the speed of the drops within the ride. As the elevator plunges, it offers a rare, weightless feeling by traveling at a speed just slightly faster than freefall. Every visit to the “5th dimension” is different due to the use of a random generation that creates a unique drop pattern every time. The highest drop possibile is a 13-story fall.

Guests are invited to brave the unforeseen number of drops, increased falling speed, and the ominous story of a supernatural vanishing act and enter their very own episode of The Twilight Zone. Should they choose to accept this invitation, guests will move into “a land of both shadow and substance, of things and ideas” by using the one tool that can unlock the door to the obscure “5th dimension”… imagination. 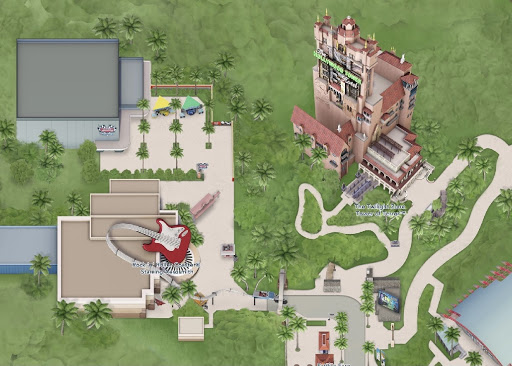 The Twilight Zone Tower of Terror™ is located at the end of Sunset Boulevard, just past the Hollywood Hills Amphitheater and next door to Rock ‘n’ Roller Coaster. To enter the queue, guests head down the small hill beside the hotel that leads to the front gate.

This multi-drop and elaborately themed attraction typically has one of the highest wait times at Disney’s Hollywood Studios. Wait times are usually reasonable when the park first opens and in the late afternoon as the park approaches its closing time.

Walt Disney World guests enter the hotel’s front gate and venture up an imperfect stone pathway through overgrown gardens. The walkway is soundtracked by a collection of snappy 1930s jazz tunes. Guests then pile into the hotel’s art deco lobby which is covered with cobwebs, dust, and cracks in the walls. They are then instructed to gather in the library, which features many easter eggs from the original series. The show’s host Rod Serling proceeds to greet guests on an old-fashioned television and tells the tale of the five people who were last seen at the hotel on October 31st, 1939. He invites guests to enter the infamous elevator, if they dare, and become the star of tonight’s episode.

Guests are led through the boiler room and to the maintenance elevator at the center of the hotel’s lore. Once aboard the lift, guests begin their five minute long suspense-filled adventure through the darkness and surprises of The Hollywood Tower of Terror. Simultaneously, they encounter the supernatural, psychological, and imaginative dimension of the Twilight Zone.

Board this boat for the laugh of a lifetime as you sail across rivers in Asia, Africa, and South America with your comedic… Read More »

You’re almost ready for your trip to Disney World. You’ve packed your bags, booked your rooms and decided where you’re… Read More »