Now that Mickey’s Not-So-Scary Halloween Party has begun, it is finally spooky season at Disney World! During this ticketed event at Magic Kingdom, guests are treated to a bunch of halloween themed offerings, such as snacks, entertainment, and character meet and greets. Disney’s PhotoPass service is also getting in on the halloween fun by providing special picture opportunities throughout the park. Read on to see where you can find all the frightfully fun photo-ops at Mickey’s Not-So-Scary Halloween Party!

Right before you head down Main Street USA, you will find a Disney PhotoPass location in Town Square near the flagpole. In this spot, which features 2 sets of stacked pumpkins, you can take a photo holding a Mickey Mouse shaped Jack-o’-Lantern.

Dance the night away with some skeletons with this Magic Shot! Ask any Disney PhotoPass Photographer positioned on Main Street if they can snap this black and white photo for you.

If you are looking to take a photo with a spooky aesthetic, this Main Street Magic Shot is for you! Photographers on Main Street USA should be able to take this vintage looking picture.

Just past Main Street USA is the Cinderella Castle Hub area. Photographers that are situated around this area can take a few very special Magic Shots including this Flaming Pumpkin. While this Magic Shot can work for groups, only one person will appear to be holding the pumpkin.

Oogie Boogie, from The Nightmare Before Christmas, makes several appearances during Mickey’s Not-So-Scary Party, including this Magic Shot! If you want a photo with the Boogie Man, look for a photographer that is facing Cinderella Castle.

Want to feel like one of the Sanderson Sisters? Head to one of the grass areas in hub area, near Casey’s Corner and The Plaza Restaurant, for this cauldron Magic Shot!

With a special lens effect, a photographer in Tomorrowland can take a picture of you surrounded by Mickey Mouse Halloween Lights. This photo-op is located near the Carousel of Progress. 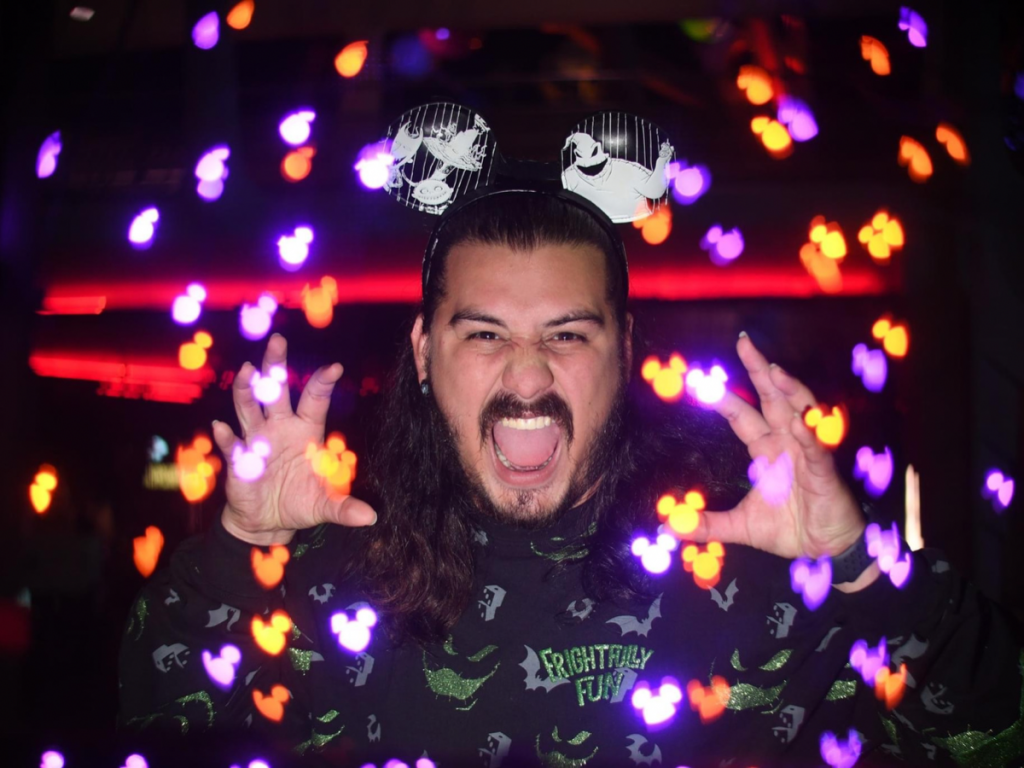 There is even more fun with lights to be found in Tomorrowland! Using a moving light stick, photographers can achieve this halloween-themed back drop. You will find this photo-op also near the Carousel of Progress.

Dr. Facilier, who has a solo in the Hocus Pocus Villain Spelltacular, is the star of this Fantasyland Magic Shot. Take this Shadow Man inspired photo at the Cinderella Castle walls near Pinocchio Village House.

Light your way through the halls of happy haunts at the Haunted Mansion with this lantern photo-op. You can get a picture holding the caretaker’s lantern taken near the entrance of the attraction.

One of the most amazing sights to see at Mickey’s Not-So-Scary Halloween Party is the Headless Horseman riding down Main Street at the beginning of the parade. The Headless Horseman also makes an appearance in this Magic Shot photo-op near the Hall of Presidents.

While there are already 999 happy haunts at the Haunted Mansion, there is always room for 1,000. If you want to join the Hitchhiking Ghosts for a photo, look for a photographer near the Hall of Presidents!

Are you going to Mickey’s Not-So-Scary Halloween Party this year? Which frightfully fun photo-op are most excited to experience? Let us know in the comments!

International Women’s Day has kicked off the Women’s History Month celebrations. Celebrations can be experienced in Magic… Read More »

Relive a blast from the past this summer with Disneyland After Dark’s newest after-hours party – Grad Night Reunion…. Read More »