Walt Disney dreamed that his parks would be “a world of Americans, past and present, seen through the eyes of imagination”. The Hall of Presidents at Magic Kingdom displays the past and present America that Walt hoped for. This opening day attraction provides a brief history of the United States by honoring the American Presidency. Guests experience the American story and learn that the “Home of the Free and the Brave” is a country that always strives for improvement.

The Hall of Presidents is a multimedia presentation of United States history and its leaders from 1776 to present day. The creation of this attraction was inspired by Walt’s love for America and the optimism he saw in his country’s history. America’s story is told at Magic Kingdom with 3 digital projection screens and forty-four audio-animatronic replicas of the country’s Presidents.

The twenty-five minute show begins with a short film detailing America’s many struggles and how the country sought to work through these conflicts. In the middle of the film, the screens rise to reveal an audio animatronic of America’s sixteenth president, Abraham Lincoln. President Lincoln treats guests to his infamous “Gettysburg Address” speech from 1863.

When the film concludes, the screens rise for a second time but instead the stage is filled with all the men who have served as “President of the United States”. The animotoric replicas of George Washington and the current President give short speeches. These addresses are followed by a roll-call of all the past leaders of the “Land of Liberty”.

With each presidency, the Hall of Presidents is updated to include the animatronic and speech of the newly elected Commander in Chief. Despite Disney’s dedication to accuracy, the Hall of Presidents’ stage will always have one less animatronic than the number the current President holds. This discrepancy can be attributed to the fact that Grover Cleveland served non-consecutive terms making him the twenty-second as well as the twenty-fourth President. 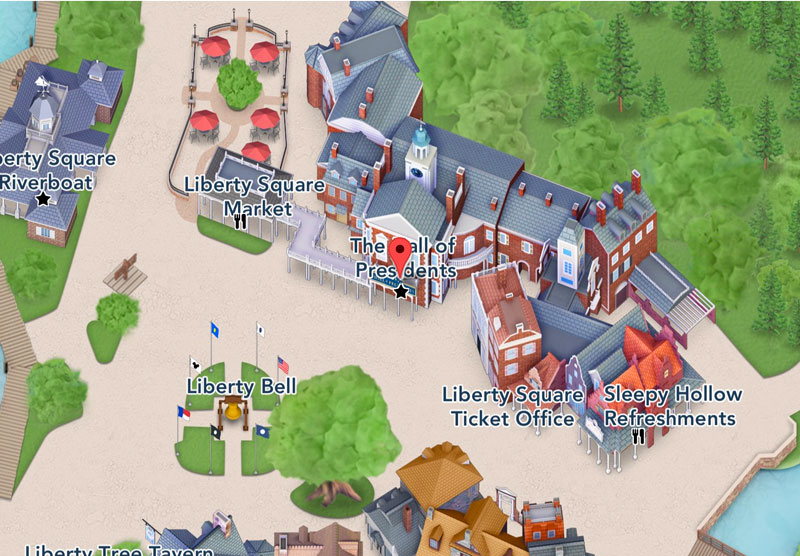 This patriotic attraction typically has low wait times. Shows run every twenty-five minutes with an audience capacity of 700 per show. The outside of the Hall of Presidents features a clock above the entrance that displays the next showtime.

The Hall of Presidents building resembles Philadelphia’s Independence Hall and is labeled with the year the United States Constitution was signed, 1787. This attraction is unique because it does not have a traditional queue line. There is in fact no line at all and rather a large waiting area for guests to stand in prior to the show. The entrance of the lobby houses one of the two places where the Presidential Seal can be seen. The second spot is in a small office in Washington, D.C. known as the Oval Office.

The rest of the waiting area is filled with other presidential artifacts. The walls are lined with portraits of past presidents such as Ronald Reagan, George Washington, and Thomas Jefferson. There are multiple small exhibits that display dresses of first ladies, pieces of china, golf clubs, microscopes, and mugs. Prior to entering the theater, guests can see a bust of the man who’s deep admiration for America and its Presidents led to the establishment of The Hall of Presidents: Mr. Walt Disney.

The Halloween season is in full swing at Disney World! Along with the beginning of Mickey’s Not-So-Scary Halloween Party… Read More »

Yo-Ho, Yo-Ho, if it’s a pirate’s life for you, head to Tortuga Tavern at Magic Kingdom for some swashbuckling… Read More »