When guests board Seven Dwarfs Mine Train, they are embarking on a thrilling roller coaster. In this adventure ride they will dive deep into the mine shaft of a mountain while on a rustic train, encounter beautiful jewels, and follow the Seven Dwarfs and Snow White on their adventure. Guests can also find an incredible view of Fantasyland at the peak of the mountain.

Guests will be seated in a mine car before starting their journey on the Seven Dwarfs Mine Train. Each mine car seats four, with two in the front, two in the back. The cars have barrel seats, meaning that instead of bench, each guests has their own seat, as well as a lap bar, though both the front and back of the cars have a stationary handrail to hold on to. In addition, the cars showcase a ride system called a “tilting vehicle,” allowing the vehicles to sway and tip like an authentic mine car. The cars are also “variable speed” vehicles, allowing them to slow down or speed up based on which scene they are on the ride.

In terms of how thrilling the roller coaster is, it would likely fall between the Barnstormer and Big Thunder Mountain Railroad. The three minute ride is fairly smooth, and alternates between going inside the mine shaft to outside, where it swings around sharp turns and drops down small hills. Inside the mine shaft the vehicles slow down past scenes featuring beautiful scenery including media-enhanced animatronic dwarfs. The ride culminates in a heart-pounding scene on your right, where Snow White and the Dwarfs are dancing inside the cottage while the Evil Witch peers into the cottage window. After this scene comes re-entry into the mine shaft, and the end of the ride.

Seven Dwarfs Mine Train features songs of the original film, including Heigh-ho!, and the yodeling scene inside the cottage. The attraction not only has a Photopass photo opportunity on the ride, but also a video! 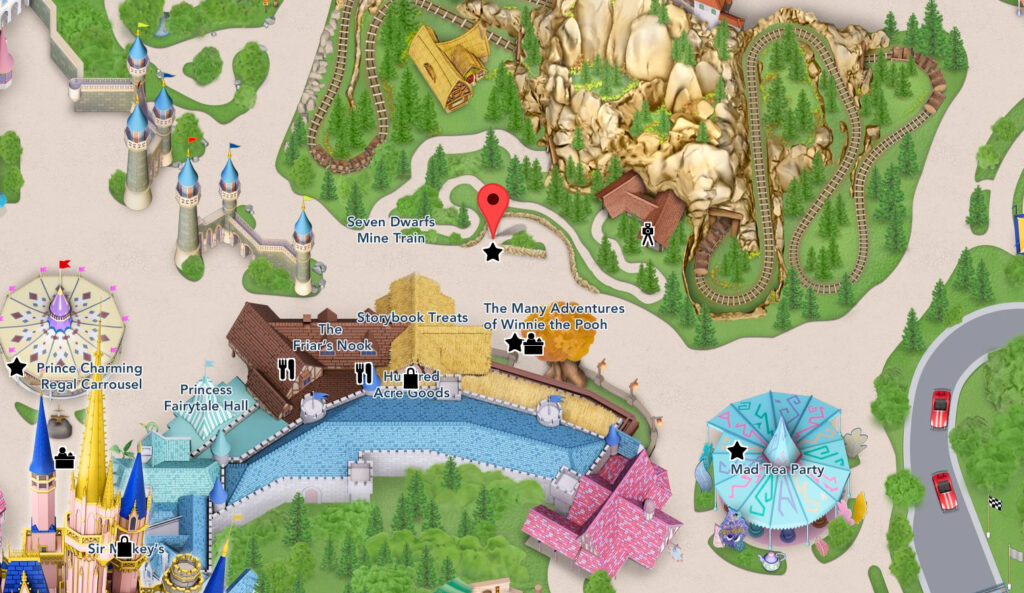 Located across from The Many Adventures of Winnie the Pooh, the location in which Seven Dwarfs Mine Train lives has undergone quite a few renovations over the years that Fantasyland has existed. When Magic Kingdom first opened in 1971, this location had an entirely different attraction, which most tourists are unlikely to remember: 20,000 Leagues Under the Sea: Submarine Voyage. Operating until 1994, the attraction was themed after the 1954 Disney film 20,000 Leagues Under the Sea, as well as Disneyland’s Submarine Voyage ride. Magic Kingdom’s 20,000 Leagues attraction covered quite a large part of Fantasyland, also encompassing what later became Ariel’s Grotto and the short-lived Pooh’s Playful Spot. The attraction was a submarine ride through a lagoon of sea life and mermaids, and was 20 minutes long!

Seven Dwarfs Mine Train is arguably one of Magic Kingdom’s most popular attractions and is a hallmark of Fantasyland. Pre-2020’s park closure, the attraction averaged a 120 minute wait time, and still often reaches that level of popularity now. The majority of the queue is outdoors, so remember to not only prepare to be outdoors waiting for a long period of time, make sure to remember to have plenty of sunscreen and water on you, as well as ponchos and umbrellas for Florida’s famous rainstorms

The attraction’s queue is divided into two sections: the outdoor portion and the indoor portion. The outdoor portion of the queue is a forest at the base of the mountain’s mine shaft. Once making it to the inside portion of the queue, the mine shaft, guests have several interactive games to entertain themselves with, utilizing the barrels of jewels that the dwarfs have mined. One can sort and wash jewels in a washing station that has a wooden spigot carved into a woodland animal. There is also a barrel spinning game that creates images of the Dwarfs on the mine’s ceiling. There are also twelve musical spigots for gem washing, each creating a note on the chromatic scale. This attraction’s queue really immerses guests into the world of the Seven Dwarfs.

For guests in wheelchairs or ECVS, it’s important to note that guests must be able to transfer into the ride vehicle. In addition, service animals are not allowed on the ride. Expectant mothers should not ride, and any guests with high blood pressure, heart, back, or neck problems, motion sickness, or other medical conditions should be cautious of their conditions being aggravated by the ride.

I have stayed at Boulder Ridge, All Star Movies, Art of Animation, and Old Key West. My favorites were Boulder Ridge and Art… Read More »

If you go to Adventureland at the Magic Kingdom you’re sure to pass by some flying carpets in the sky. This land is the… Read More »