Be inspired by a retelling of the US history and the spirit that started this nation at The American Adventure in Epcot!

Experience the American story with this patriotic, 29 minute long show. With over 35 audio-animatronics and digital rear projections, you can get an up-close look at the beginning days of the America’s history.

In the Colonial Theater, located in the America Pavilion of the World Showcase, this show is presented on a 72-foot screen. This theater was designed with a classic Georgian style that was typical of the 1700s. Elements of this theater were inspired by Colonial Williamsburg, Independence Hall, Thomas Jefferson’s Monticello, and the Old State House in Boston.

As this spirited story unfolds, historical figures Benjamin Franklin and Mark Twain will guide you through some of the country’s most impactful moments. These important events include the landing of the Mayflower, the Boston Tea Party, the winter at Valley Forge, the writing of the Declaration of Independence, the Civil War, and the Great Depression. Susan B. Anthony, Frederick Douglass, Thomas Jefferson, Chief Joseph, and Teddy Roosevelt are other people from history who are represented in this show.

Unlike other Disney show offerings, The American Adventure is full of elaborate sets. 10 different times during this show the set is changed by a computer-controlled movable device. This show also has the first ever audio-animatronic that appears to be walking. 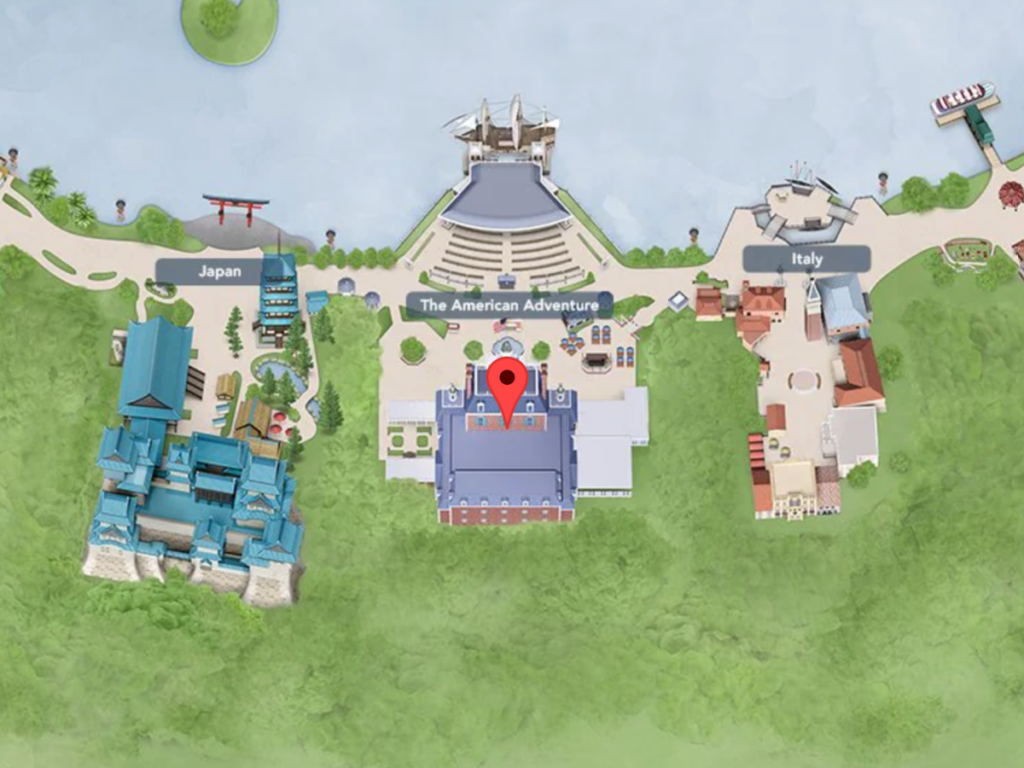 There is little to no wait for the American Adventure because it’s a scheduled show. Currently this patriotic show is offered at 11:30 AM, 12:30 PM, and 1:30 PM. If you arrive early, you can hear the Voices of Liberty perform in the lobby of the American Pavilion at 12:00 PM, 1:00 PM, and 2:00 PM. The Voices of Liberty is a choral group that performs some classic American tunes while dressed in period appropriate clothing.

The building that houses the American Adventure is very grand and has much to offer. In addition to the Voices of Liberty, there are exhibits that you can explore while you wait for your showtime. Right now, you will find a Soul (2020) themed exhibit. The walls of the rotunda are also lined with quotes from influential Americans, like Althea Gibson, Charles A. Lindbergh, Ayn Rand, and, of course, Walt Disney!

Just a few minutes before the show, a cast member will direct those waiting for the American Adventure to the Hall of the Flags. Just as the name suggests, this room is filled with 44 flags including Revolutionary War flags, colonial flags, and even flags from the other countries that had claimed land in the US. This hall also has two escalators and a set of stairs that will take you to up to the theater.

One comment on “The American Adventure Overview | Disney’s EPCOT Attractions”

Across EPCOT’s World Showcase neighborhood, you can immerse yourself in the stunning scenery and authentic details of 11… Read More »