Pirates of the Carribean takes guests back in history to the days when pirates sailed the seas and occupied the islands of the West Indies. This voyage to the 17th century is a slow, dark 8 minute boat ride with audio animatronics and many creative set pieces. Weathered watercraft ride vehicles hold 22 guests and travel through the 750,000 gallons of water in this attraction’s ride path.

Guests embark on rickety boats that take them through an ominous cave filled with skeletons and the wreckage of a ship. At the end of the cave, a talking skull takes a ride photo as he warns guests of the Flying Dutchman captain, Davy Jones. This photo is linked to the My Disney Experience app through guests’ magic bands. Next, the boats head down a pitch black path that leads guests down a waterfall.

This trip down a waterfall leads guests right into the middle of a canon fight. From a nearby ship, Captain Barbossa eggs on the confrontation and calls for his crew to “Fire at will”. Guests then travel into a village that has been clearly been invaded by scalawags. The village is riddled with kidnappings, ravagings, auctions, and arson.

As the village is set aflame, the pirates sing the classic tune, “Yo Ho, Yo Ho, A Pirate’s Life for Me”. Throughout these village scenes, Captain Jack Sparrow can be seen on the run for one of his many infamous misadventures. The ride concludes with a cell full of pirates trying to coerce a dog for its keys and Jack Sparrow sitting in a room full of treasure as he sings to himself.

The adventures portrayed on this attraction inspired the Pirates of the Carribean movies franchise which began 2003 and has spawned five films so far. The success of these films lead to the addition of the movie character to the attraction such as Jack Sparrow, Captain Barbossa, and Davy Jones. 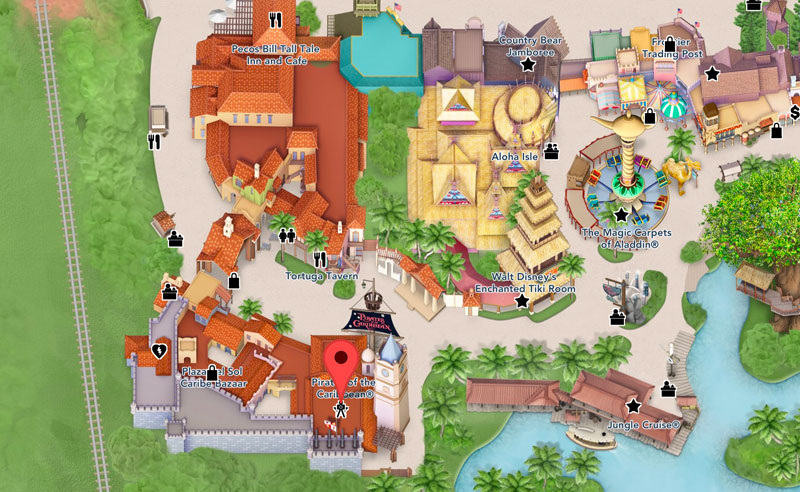 Pirates of the Caribbean is located in Adventureland and is also close to the entrance of Frontierland. The daring pirate attraction sits just past The Jungle Cruise and across from the Tortuga Tavern.

Wait times for a voyage into the pirate world tend to be moderate but on busy days can reach higher levels. The wait times are usually the lowest first thing in the morning and late afternoon into the evening.

The building that holds Pirates of the Caribbean has similar architecture to Spanish forts. It is specifically inspired by the Castillo de San Felipe del Morro in Puerto Rico. The exterior also features a watchtower and a pirate ship mast.

To enter the queue, guests enter the fort which is full of canons and other battle supplies. The queue actually has two separate routes that lead to the ride. One side is designed to represent the “soldier” side while the other is intended to display the “Pirate” side. The two sides meet in the spot known as “Pirate’s cove” which is where guests load their own ships.

One of the most well known aspects of the Disney World queue is the two skeletons who are playing chess. The lore of this chess game is that the board is arranged in a “stalemate” situation. This means that neither player is able to make a move which renders the game unwinnable. The myth is that the two players had to stay at the board until their deaths because of the stalemate. Disney World guests may never know the truth of that chess game because as the pirates say, “Dead men tell no tales”.

You have been planning your trip for months, maybe even years! It is finally the week of your Disney dream vacation and you… Read More »

Rise of the Resistance: How To Join The Virtual Queue

It is no secret that one of the most popular attractions in Disney’s Hollywood Studios right now is Star Wars: Rise of the… Read More »