Fly above Storybook Circus on Dumbo the Flying Elephant. This fanciful attraction will bring levels of enjoyment to new heights for all.

Dumbo the Flying Elephant is one of the original attractions inside Magic Kingdom opening on October 1, 1971. This aerial carousel has sixteen dumbo vehicles that are attached to a rotating center. When the ride starts, guests will be able to control Dumbo and make him fly higher or lower by using a joystick inside of their vehicle.

A couple of fun facts about this attraction, the Dumbo vehicles were originally painted pink, modeled after the scene in the movie where Dumbo hallucinates the dancing pink elephants. Walt Disney did not care for the look and decided to paint them grey like the real Dumbo. Also, when the ride originally opened, the Dumbo vehicles did not have their signature hats that they sport today. The hats were added a few months after the ride opened.

The ride was originally built with the first sixteen Dumbo vehicles. The refurbishments done in 2012 included adding in the second portion of the Dumbo ride, with another sixteen vehicles. Although they look identical, each carousel rotates in opposite directions, one clockwise and the other counterclockwise.

Nowadays, in the center of this attraction guests will see Mrs. Jumbo as well as the storks from the opening of the feature film, along with the beautiful water feature. On the water feature, there are images that tell the story of Dumbo, that guests will be able to see as they spin around the centerpiece. Although the refurbishments for this ride were quite extensive at the time, this attraction maintains its original charm that will last a lifetime. 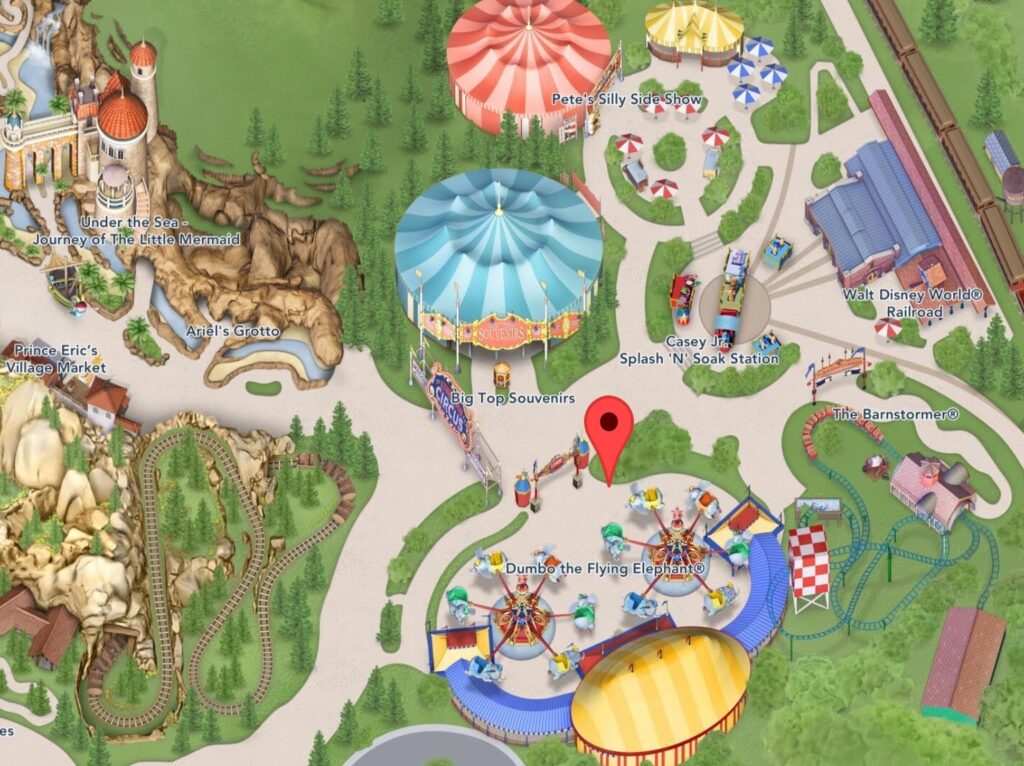 Wait times for this ride are typically low. There are moments midday where the wait times will get a little longer, but this is a great choice for those looking to enjoy a fun attraction while not waiting forever in a line.

Even if the queue looks to be long for this attraction, since there are so many vehicles, the line will move quite quickly.

The queue for Dumbo the Flying Elephant is a simple, yet fun experience. When the queue gets long, guests will have to wait outside with views of Dumbo flying. However, as guests get closer to the entrance of the attraction, they will enter a red and blue circus tent. Along the ceiling are light bulbs hanging just like one would see in an old school circus. Traditional looking circus signs tell guests all about the amazing Dumbo that they are about to see and truly sell the idea of entering the Storybook Circus.

How Can I Do Disney On A Budget?

Planning a trip to Disney doesn’t need to break the bank. There are plenty of ways to save money on a fantastic trip to… Read More »

Docking Bay 7, An Out of This World Eatery At Disney’s Hollywood Studios

If, like me, you’ve found it difficult to find quality quick-service restaurants at Disney’s Hollywood Studios, look no… Read More »