Disney’s newest transportation system with a bit of nostalgia.

Scheduled to open on September 29, 2019, the Skyliner gondolas at Disney World will be the newest and most exciting way to travel around the Disney Resort in Orlando. In addition to the monorail, boats and buses, the new Skyliner will be the fourth free transportation option that will whisk you between the parks and hotels in the southeastern region of the resort.

Disney broke ground on the Skyliner in 2017 and development has been on schedule with the Skyliner system already being tested as far back as January of this year. Guests have reportedly seen gondolas floating by on both routes of the Skyliner in recent weeks. Check out the video below for an up close look at the Skyliner ride system.

Blast from the Past

Although the new Skyliner will be a state of the art gondola system, those who visited Disneyland or Disney World before the new millennia may feel a bit of nostalgia for its predecessors, the Disneyland Skyway and the Magic Kingdom Skyway.

At the Walt Disney World Resort, the Skyway opened as one of Magic Kingdom’s original attractions and operated for a total of 28 years before closing in 1999. Like the Skyliner, the Skyway transported guests high above the park using a cable gondola system with stations in Tomorrowland and Fantasyland. The one way trip took about 5 minutes to transport a maximum of 4 guests from one land to the other. Guests who remember the original Skyway are sure to enjoy the new Disney Skyliner gondolas.

How The Skyliner Works

Similar to ski lift gondolas, the Skyliner will be a continuous moving transportation system that will slow down to allow riders on and off at the stations. A separate queue will be assigned for those users who need extra time and assistance boarding and departing the gondola cabins.

Each of the nearly 300 gondolas will be decorated in unique and vibrant character and attraction themes. The interiors will be outfitted with wooden benches that can accommodate up to 10 people comfortably, including those traveling with strollers, wheelchairs or scooters. There will be no standing allowed while riding the Skyliner.

One concern for many is whether the Skyliner will have air conditioning in the vehicles. Disney has confirmed that the cars will not have air conditioning, but they will have an air flow system with tilt panel windows that should provide adequate cross ventilation. Additionally, all windows will have tinted, reflective coating that will provide necessary shading from the sun. 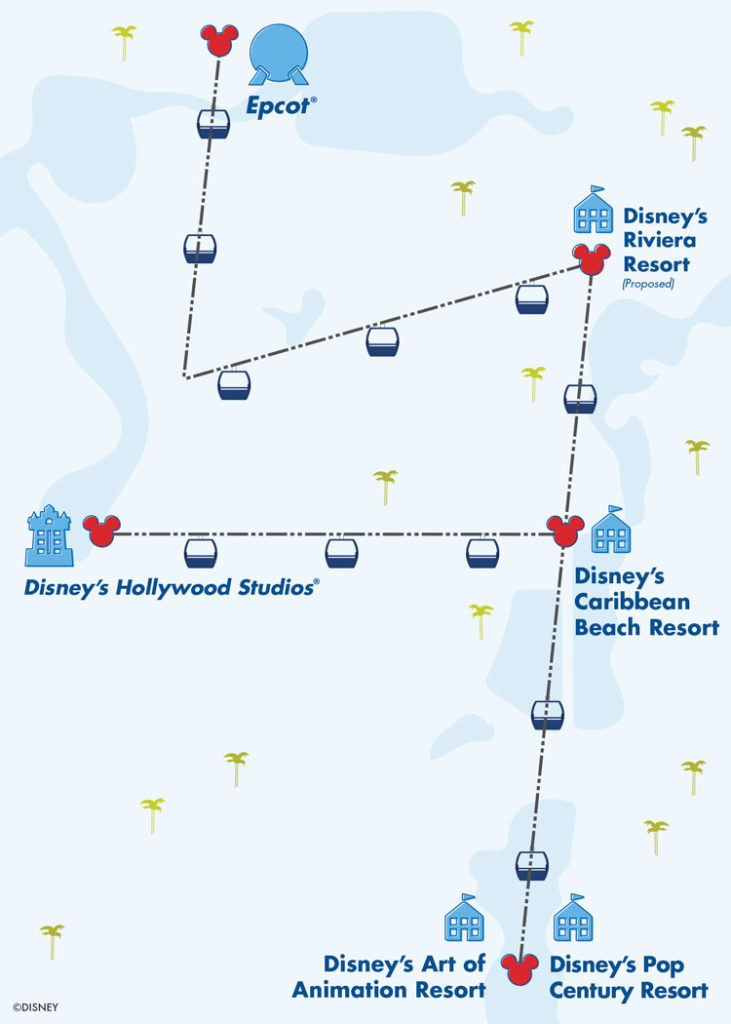 With two parks and four resort hotels on its routes, the state of the art Skyliner system has a total of five planned stations.

Each station will be uniquely themed to fit the style of its location. The Epcot station is planned to have a European theme with an iron and glass roofed building and the Hollywood Studios station will fit in with its Streamline Moderne architecture and teal and red color scheme.

The station locations will be a welcome addition to this section of the Disney World Resort that currently uses buses as its main form of transportation. This is especially a great benefit for those guests who love to stay in two of Disney’s most popular value priced hotels, Art of Animation and Pop Century.

The Caribbean Beach station will act as the central hub for the Skyliner with direct transfers to either Hollywood Studios or Epcot as well as the other resort hotels on the routes. Guests travelling from one theme park to the other will need to transfer at the Caribbean Beach hub. Disney has not yet commented on whether guests transferring will need to wait in line again or not.

With amazing high in the sky views of the resort and attractions, those with kids will potentially be riding the Skyliner quite frequently as it will be an attraction in and of itself. The monorail is currently the transportation option of choice for most, but the new Disney Skyliner gondolas will surely give the beloved monorail a run for its money.

Each week we’ll review one of Disney’s DVC Resort locations and provide our readers with an overview of the resort,… Read More »