Prepare for the flight of your lives on Millennium Falcon: Smugglers Run! Whether you’re a pilot, gunner, or engineer, you and your crew must work together to carry out a mission for Hondo Ohnaka. In one of the most interactive and immersive attractions on Walt Disney World property, guests will find themselves working to outmaneuver and outgun their competition, with the odds of whether they will succeed or fail up to them.

Opened on August 29, 2019 with the rest of Star Wars: Galaxy’s Edge at Disney’s Hollywood Studios, Smugglers Run immediately became a crowd favorite with its immersive motion simulator, interactive features, and thrilling story. While the land of Galaxy’s Edge had been announced in 2015, the ride and its name weren’t announced until 2018. The ride consists of four slowly turning attraction turntables, all of which have multiple cockpits, where guests can immerse themselves in their favorite starship while on an exciting adventure. 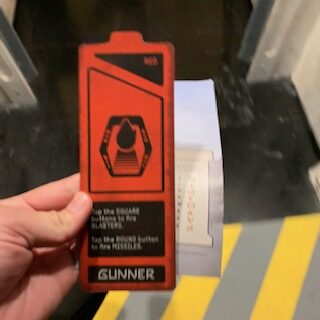 The Falcon is located in Hondo Ohnaka’s shipping yard in the center of Black Spire Outpost on the planet Batuu, a planet on the edge of the galaxy where travelers pass through and where people come to restart their lives. On the ride, guests are required to choose a position in the cockpit (pilot, gunner, or engineer) to bring their cargo safely to its destination. The ride (and the planet) is set during the timeline between Star Wars: The Last Jedi and Star Wars: The Rise of Skywalker.

The ride experience begins with the guests in each boarding party loading into their assigned station in the Falcon’s cockpit. There are three rows of two seats each, separated by the aisle. The front row is the pilots, the second for the gunners, and behind them the engineers. The pilots’ consoles are in front of them, while the gunners and engineers’ are to their sides. The left pilot steers the ship left and right and the right pilot steers them up and down, as well as sending them to lightspeed. Behind them the gunners will shoot down any enemies and obstacles, while the engineers work to repair any damage taken during the mission. 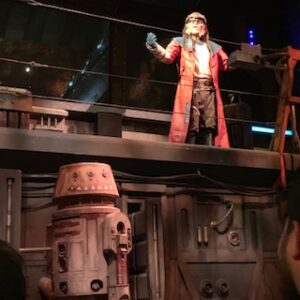 Hondo’s goal for each crew of travelers is to fly to Corellia, Han Solo’s home planet (as seen in Solo: A Star Wars Story) and steal as many containers of coaxium (fuel to jump to hyperspace) as possible from the First Order, while evading First Order TIE-fighters. If the team works especially quickly, they’ll have the opportunity to gather more containers. In addition, any “damage” the ship receives will also affect the lighting in the cockpit’s exit corridor, making the ride and each guest’s performance seem even more real. Once the crew has stolen as much coaxium as possible on that trip, they travel through hyperspace back to Batuu, where Hondo evaluates the Falcon‘s damage and how much cargo you were able to steal in order to decide how many points you will receive. The ride length is about four and 1/2 minutes, and it flies by on this exciting and consuming adventure. 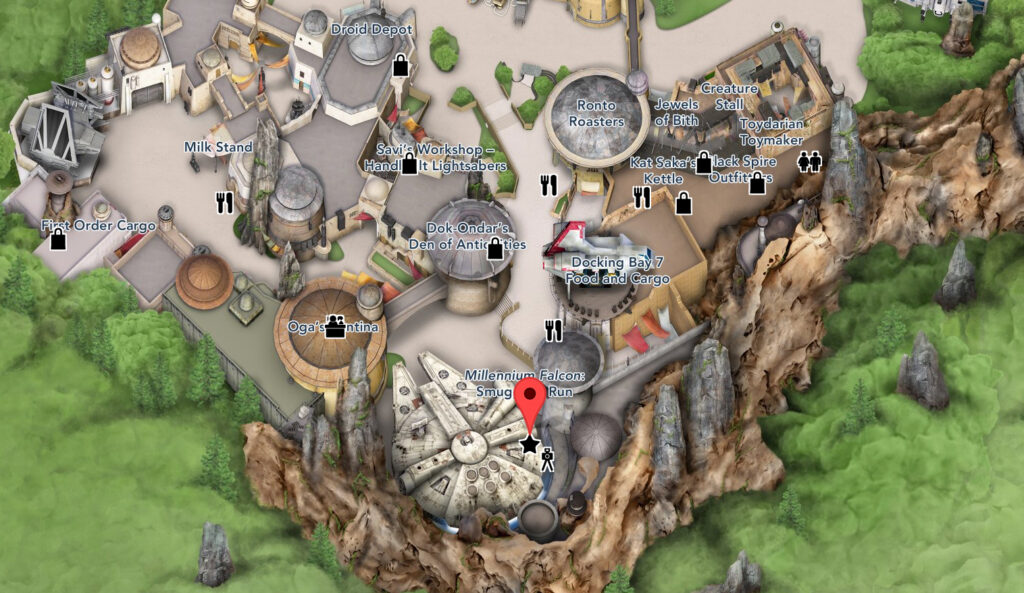 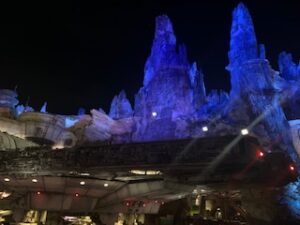 Smugglers Run is located approximately in the central area of Galaxy’s Edge, in between Docking Bay 7, Oga’s Cantina, and Dok Ondar’s Den of Antiquities. Wait times usually tend to be at least 40 minutes, given the popularity of the ride, but can be lower early in the morning or close to park close. Behind the ship are some of the outpost’s famous Black Spires, petrified remains of massive trees that turned gray and brown, but have a beautiful blue and purple illumination at night.

Located at Ohnaka’s Transport Solutions inside Docking Bay 5, the entrance to the Smugglers Run queue is at the bottom of a tower just to the left of the Millennium Falcon. If the queue is long, it will extend outside, wrapping around behind the Falcon. The majority of the queue continues inside through the docking bay’s engineering and mechanic shop, where guests continue up ramps while able to observe all of the small ships, parts of ships, and cargo. One of the highlights of the queue is when guests reach the window of the docking bay and are able to look out onto the expanse of the ship that is the Millennium Falcon in what is an amazing view for travelers. 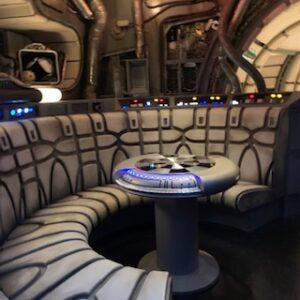 Near the end of the queue, guests will pass through a command center where Hondo Ohnaka and the R5-P8, both characters introduced to fans in Star Wars: The Clone Wars, tell the travelers what sort of mission they are about to face. After Hondo speaks, each guests receives a boarding pass with an assigned color that tells them their assignment (pilot, gunner, or engineer) for the mission. As they wait for the mission to begin, guests are free to explore the infamous “living area” of the Falcon, and can even sit at the table/console where they’ve seen Chewbacca playing Dejarik (a holographic battle form of chess) in the Star Wars movies. When your team’s boarding pass color is called, it is time for your mission.

Guests in a wheelchair or ECV must be able to transfer in order to ride. Audio description, handheld captioning and assistive listening is available on request. Expectant mothers should not ride, and guests with health conditions such as high blood pressure, heart, back, or neck problems, or motion sickness may find these conditions aggravated by the ride. Good luck on your next mission!

Going to Disney World is a magical vacation that will leave your family with memories that last a lifetime. When you have a… Read More »

Where To Dine At Disney Springs Without A Reservation

Dining at Disney World is a great experience since there are so many options. With selections and cuisine for any taste,… Read More »