The day that people have been waiting for is almost here, The Avengers Campus is set to open in Disney’s California Adventure on June 4, and we have all the information on what guests can expect at this grand opening.

For those who cannot wait to see California Adventure’s newest addition another moment, the opening ceremony of the Avengers Campus was streamed live today, June 2, at 8:15 PM PT, and we’ve embedded it on the top of this article. The live streamed event features a walkthrough of the new land and all that it has to offer, including appearances from some familiar faces.

Now that Avengers Campus has opened, you can see some of the first guests’ experience by watching the video below:

The Web Slingers will be the main attraction featured in the Avengers Campus. It will be an interaction ride, similar to Toy Story Midway Mania but much more technologically advanced. Guests will use their hands as web shooters to help Spider-Man trap spider bots while moving along a track on this adventure. The webs on the screen will move and land in correspondence with guests’ actual hand placement. This ride also has no height requirement, so the whole family will be able to enjoy the Spider fun.

Guests can expect to join Doctor Strange at the Ancient Sanctum to train in the mystic arts. Similar to the Star Wars Training Academy, this show will teach children how to harness the power of the multi verse and use it to defeat evil entities. In addition, Doctor Strange will use his mastery of the mystic arts to create portals and illusions.

Also at Ancient Sanctum, guests will find the Orb of Agamotto. This orb is the containment of the Chamber of Shadows. At night the Orb and the rest of the Ancient Sanctum will come alive.

Guests who have wanted to be as strong as the Black Panther and the Dora Milaje, Wakanda’s elite guards will have the chance to learn. General Okoye will offer training classes to those guests who think they have what it takes.

One of the most anticipated attractions that Avengers Campus will have to offer is the Spider-Man Stuntronics. The robot technology that Disney developed is so innovated and one of a kind it is sure to be absolutely mind blowing to anyone who sees it. The robot will be dressed as Spider-Man and flip through the air landing on pads hidden behind buildings.

It is unclear at this time what the Spider-Man Stuntronic will be used for. Two current theories are that it will be a part of the larger Avengers Stunt Show, discussed below; or as a way to signal that Spider-Man is out and available for meet and greets. For example, he may fly through the air and then exit a building for photos. The live stream may bring more answers on what it will be used for, or guests may have to wait until June 4 to know for sure.

Next to the Quinjet, guests can expect to see a battle up close and personal at the Avengers Campus. Black Widow, Black Panther and Captain America will be battling Taskmaster. This villain can be seen in Marel’s newest movie, “Black Widow”. During the stunt show, the performers will utilize swords, shields, and other weapons while fighting Taskmaster.

Marvel superheroes and supervillains will battle in a rooftop stunt show next to a Quinjet docked on top of the Avengers Headquarters building.

Black Widow, Black Panther and Captain America will fight Taskmaster, the primary villain of the new Marvel themed land and the mysterious masked antagonist in Marvel’s upcoming “Black Widow” movie. Taskmaster will use his innate ability to mimic the fighting style of his foes to battle the Avengers, according to the backstory for the stunt show.

Stunt performers will use swords, shields and martial arts weapons during the staged fight while leaping from the rooftop ramparts of the Avengers HQ building. Disney has auditioned stunt performers for the roles of Captain America, Black Widow, Black Panther and Taskmaster.

Guests will be able to see the immaculate Quinjet sitting on top of the Avengers Campus. The Quinjet is meant to become its own attraction in Phase 2 of this lands opening, but there is no release date for it at this time. The attraction was originally planned to be a battle scene, but it is unsure at this time if that is still Disney’s plan.

Guardians of the Galaxy — Mission: BREAKOUT

Although the Guardians of the Galaxy attraction has been a part of Disney California Adventure since 2017, it will become an official part of Avengers Campus at the reopening. Guests will be able to enter the Avengers Campus from an entrance next to Mission: Breakout.

The Pym Test Kitchen will be using the incredible science of the Pym Particle to create some exciting concoctions for guests to enjoy. This lab turned quick service dining is full of foods that are very small, very large, and a combination of the two.

The theming of this dining location is bound to be one of the most immersive restaurants that Disney will have to offer. The Pym Test Kitchen will serve breakfast, lunch, and dinner.

The Pym Testing Lab follows the theme of the Pym Test Kitchen. This dining location will focus more on snacks and adult beverages.

This dining location is inspired by the very first Avengers movie. Tony Stark, AKA Iron Man, wishes to try shawarma after saving Earth, so of course Disney is here to assist with that. Guests can enjoy snack here at Shawarma Palace, just like Iron Man and the Avengers. 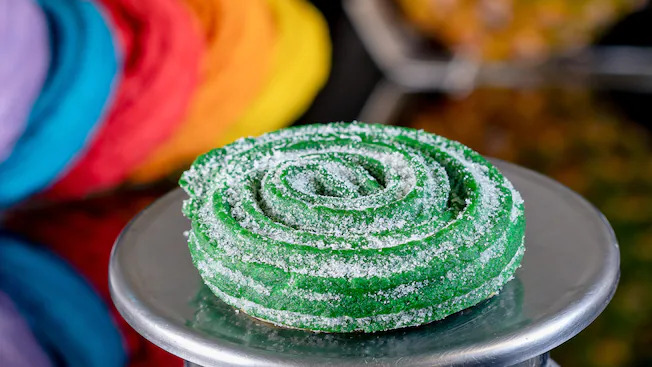 Terran Treats will be opening right next to Guardians of the Galaxy — Mission: BREAKOUT and will feature two deliciously out of this world pastry snacks.

Avengers will be assembling at Avengers Campus, and it is sure to be spectacular. Although the exact locations of some of these heroes is unknown at this time, guests can expect to see:

There may be more characters added through time to the Avengers Campus land, and there may be even more at the grand opening that Disney has not confirmed yet.

Marvel merchandise is already spreading throughout California Adventure. For those looking at purchasing Marvel merchandise and souvenirs, the Stage 17 Backlot Premiere Shop contains many great options and is truly a one stop shop. There will be a variety of apparel options as well as static figures and other toys. However, the highlights of the available merchandise has to be the web tech.

These specialty web slingers can be purchased and then used on the Web Slingers: A Spider-Man Adventure for extra powers and abilities. There are also web slingers that will light up and make noises, and even come with display stand.

The Spider Bots come in a variety of colors and are modeled after many of the Avengers characters. These little spider bots are what guests will try to capture in the ride Web Slingers, and will also make a great souvenir.

For guests looking for another really cool souvenir, look no further than the Spider-Man Goggles. These goggles will be able to create 17 different and unique expressions.

There is going to be so much to see and experience at the new Avengers Campus, and now guests know what to expect on their visit. The upcoming live stream is sure to answer some of the unknowns about California Adventure’s newest land, and we will have more updates once the Avengers Campus is officially open. Be sure to stay tuned to the DVC Shop Blog to learn more.

Let us know in the comments below what you are looking forward to most at the Avengers Campus!

Flame Tree Barbecue is a fantastic dining option for people who want an assortment of smokehouse meats and chicken dinners…. Read More »

The Many Adventures Of Winnie The Pooh Overview | Disneyland Attractions

Hop into a giant beehive and explore the Hundred-acre wood!

Many Adventures Of Winnie the Pooh Details