Put on a pair of opera glasses for this 3D show at Magic Kingdom led by Maestro Mickey, Donald, and the PhilharMagic Orchestra.

Mickey’s PhilharMagic is a 12 minute long 3D show that immerses you in the magic of Disney music. With the help of some yellow opera glasses and a 150-foot, 180-degree seamless wraparound screen, you will truly feel like you have been dropped into a Disney movie. Children are sure to be enchanted by the show’s in-house effects, such as water splashes, bubbles, and scents.

While Mickey’s PhilharMagic features classic and new Disney characters, the biggest player in this show is Mickey’s Sorcerer Hat. The show beings with Donald Duck finding and putting on this hat. Donald tries to use the hat to lead the PhilharMagic Orchestra when he magically sent into a dream world of Disney animation and music.

This animated 3D experience features songs from classic Disney films like Beauty and the Beast, The Lion King, Peter Pan, Aladdin, and The Little Mermaid. Recently, Mickey’s PhilharMagic was updated to include a brand new scene. “Un Poco Loco” from Pixar’s Coco is now part of the show. 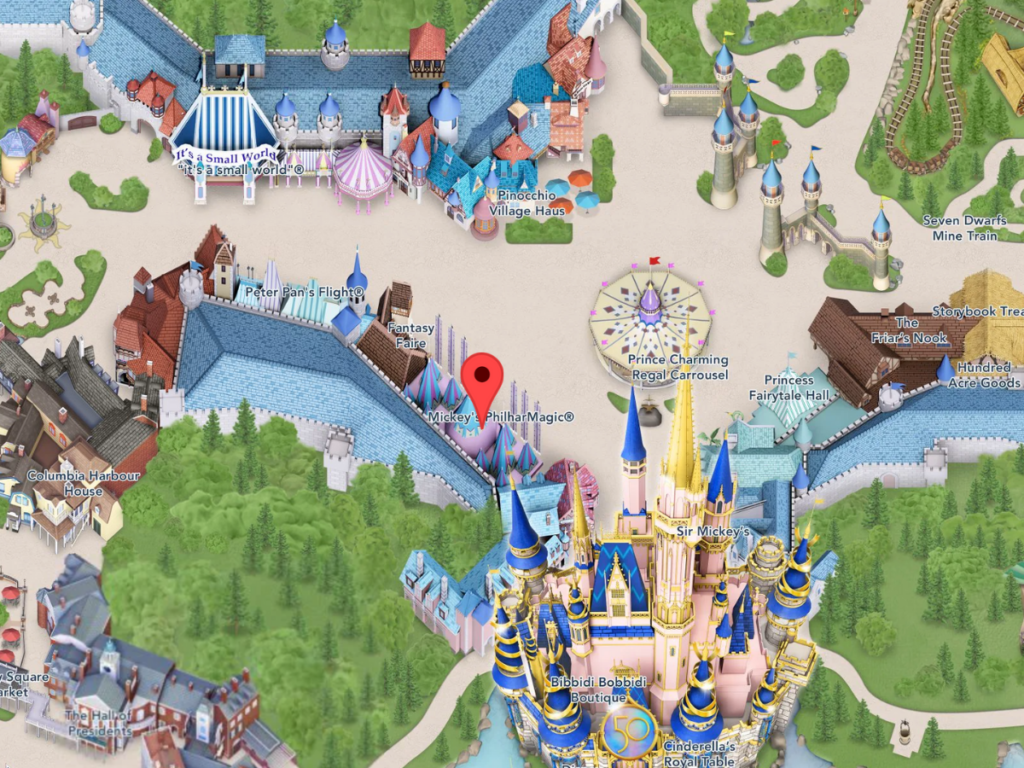 Mickey’s PhilharMagic is in Fantasyland at Magic Kingdom. This attraction sits behind Cinderella Castle and next to Peter Pan’s Flight. The wait time for Mickey’s PhilharMagic is typically around the length of show. This means you usually won’t wait much longer than about 15 minutes. When the park is busier, wait times may be a little bit longer but not normally more than 25 minutes.

The line for this ride has two parts: the main queue area and the lobby. When you enter the attraction’s line, you will walk through two large open doors where you will see a the image of Maestro Mickey and his sorcerer’s hat. As you weave through the queue area, you will see that walls are covered with posters of productions that were formerly performed at this concert hall. The posters feature characters like Hades, Ariel, Genie, Wheezy, and The Three Caballeros.

Once in the theater’s lobby, you will pick up your opera glasses which will help immerse you in the 3D effects of Mickey’s PhilharMagic. While you wait for the Concert Hall’s doors to open “automagically”, you will hear the scores from the Fantasia films along with other Disney animated movies.

Last week marked the return of After Hours parties at Disney World! For the past year, most special events at Disney had… Read More »

When you are in between trips to the Disney Parks and find yourself longing for some extra magic, relying on Disney+ is… Read More »