Disney Cruise Line has been enchanting guests since 1998, but this past Thursday they revealed a sneak peek at their much-anticipated fifth ship, the Disney Wish. This immersive vessel will set sail in Summer 2022 and it will feature several themed areas that are going to be exclusive to the Wish.

For years, Disney Cruise Line has been thrilling their guests with the AquaDuck, their original high speed water slide coaster. They’ve now taken their original water coaster design to the next level with the AquaMouse, a water attraction at sea that features show scenes from the Mickey Mouse animated shorts. There will also be a water play area for the little ones, which will bring the beloved Toy Story characters to life as rubber bath toys.

On Decks 3 and 4, guests can access the Walt Disney Theatre, where every night a different Broadway-style show will be performed. Disney’s Aladdin – A Musical Spectacular, a fan-favorite from Disney’s California Adventure and the Disney Fantasy, will be featured on every sailing, along with two original shows. Also on Deck 4, guests will be able to catch first-run films and Disney classics in the Never Land and Wonderland Cinemas.

One of the things that truly sets Disney Cruise Line apart is their world-famous Oceaneer Club, an immersive space filled with fun activities for kids ages 3 to 12. The Wish will have its own version of the Oceaneer Club, which will feature three unique areas: Marvel Super Hero Academy, Walt Disney Imagineering Lab, and Fairytale Hall.

Little Avengers can assemble at the Marvel Super Hero Academy to train alongside their favorite superheroes and then put those skills to the test against notorious villains. In the Walt Disney Imagineering Lab, young Imagineers can get a behind the scenes look at how their favorite Disney attractions are made and then get the chance to create their own roller coaster. Over at Fairytale Hall, kids will able to interact with the Disney Princesses by doing arts and crafts with Rapunzel or having story time with Belle.

For cruisers under the age of 3, the Wish will also offer “it’s a small world” Nursery, a daycare center staffed by specially trained counselors. There will also be clubs for the tweens and teens: Edge will be the hangout for tweens ages 11 to 14 and Vibe will a loft-space dedicated to teenagers 14 to 17.

The Disney Wish will also feature a number of adults-only spaces. Located on Deck 13, Quiet Cove will be home to an infinity pool and a Moana-themed café, which will be the perfect place to soak up the sun and relax.

One of the most anticipated additions to the Wish is Star Wars: Hyperspace Lounge, a Star Wars-themed bar that will make it look like you’re being transported to popular destinations across the galaxy while you sip on out-of-this-world cocktails.

The Wish will also have an entire adult-exclusive dining district themed after the beloved film Beauty and the Beast. At the Rose, guests will be served delicious cocktails among the elegance of antiques and falling rose petals. Over at Palo Steakhouse, guests can dine in a sophisticated setting that pays tribute to Cogsworth the mantle clock, and at Enchanté, you can “be our guest” to French cuisine inspired by the dashing candelabra Lumiere.

One of my favorite parts about a Disney Cruise is their rotational dining, which gives you the opportunity to feast at a different restaurant each night, but your servers travel along with you. The Disney Wish will debut three brand new dining experiences that are fun for the whole family.

At Arendelle, guests will be immersed in a Frozen-themed dining experience, where they’ll be joined by Elsa, Anna, Kristoff, and Olaf. Worlds of Marvel will feature cuisine inspired by the lands of your favorite heroes, and you’ll be pulled into the action of this superhero story to help save the day. The final rotational dining restaurant will be 1923, which is named after the year the Walt Disney Studios was founded. In this Old Hollywood-inspired eatery, guests will dine amongst animated sketches and storyboards.

Disney Cruise Line has always been known for their spacious and functional staterooms, and the Disney Wish will be no exception! The Wish will feature verandah, oceanview, and inside staterooms, all elegantly themed to Disney animated classics. Most of these cabins will offer split bathrooms, which are particularly useful when multiple members of your party are trying to get ready at once. 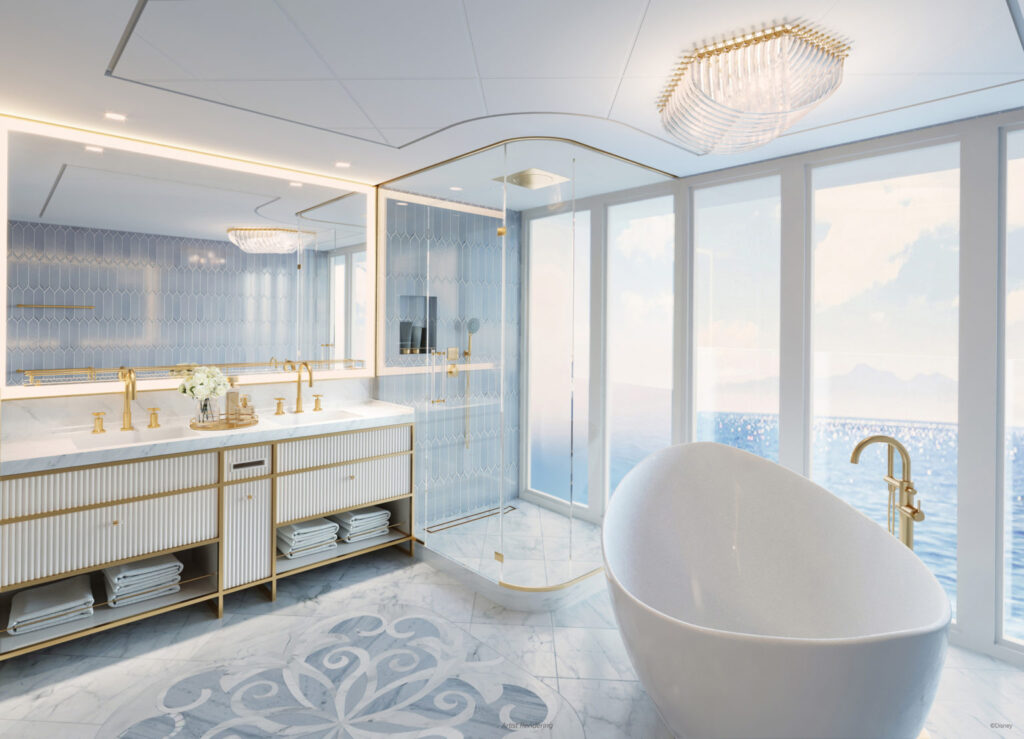 Decks 11 and 12 will be home to the concierge staterooms, which offer premium amenities and will be themed to Tangled and The Little Mermaid. Also, part of the concierge staterooms will be four Royal Suites- two of which will have two levels, a spiral staircase, and a stained-glass window. These royal residences will pay tribute to the grandeur and romance of Sleeping Beauty.

Thursday’s sneak peek at the Disney Wish just made me even more excited to sail away next summer! Her maiden voyage will begin on June 9, 2022 and will be a five-night trip from Port Canaveral with stops at Nassau, Bahamas and Disney’s private island, Castaway Cay. Then, the Wish will return to Port Canaveral for three- and four-night Bahamian sailings until the end of September 2022.

Bookings for the inaugural season of the Disney Wish will go on sale to the general public starting on Thursday, May 27th, but DVC members and Castaway Club members are eligible for early booking windows!

You’ve probably heard of eating and drinking around EPCOT’s World Showcase. But, have you ever tried to take a photo in all… Read More »

In these unprecedented times, race events were placed on hold in an attempt to reduce large gatherings. Disney has announced… Read More »